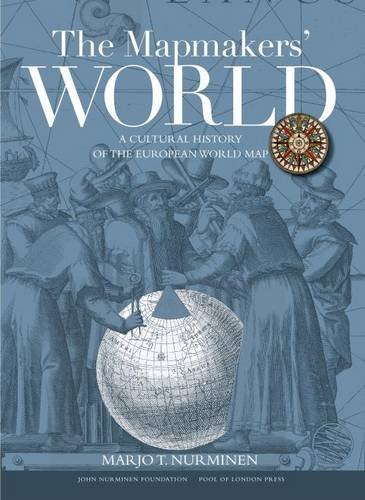 Who were the makers of these early world maps? How were the maps created and for whom were they drawn and printed? For what purposes were they used? What kind of information did they pass on? The answers to these questions open up a fascinating narrative of discovery and cartography relating not only to ideology and political power but also the histories of art and science.Rigorously researched and informed by latest academic findings, The Map Makers World is beautifully illustrated presenting some 300 maps from the world s finest museums, libraries and private collections.

The book gives us a revealing and captivating perspective on the development of European world maps from the Early Middle Ages up until the modern period, i.e. from the 8th century until the end of the 18th century. The Map Makers World is a major work which ambitiously showcases all of the early European world map traditions: Medieval world maps (T-O maps, mappa mundis, Beatus maps, etc.)- Ptolemy s maps- seafarers maps (portolan charts, planispheres and nautical charts), printed world maps and globes from the pre-Renaissance through to the Baroque era.

Furthermore, The Map Makers World takes its readers through the history of European global discovery and cartographic research, and also brings to life the exciting times when many of these historical maps were first discovered in the 19th century, after centuries of oblivion.

The volume includes dedicated features further exploring 100 of the most important cartographic masterpieces from the period. The book is written as an exciting, flowing narrative, rather than a catalogue or an encyclopedia, and it takes the reader on the ultimate voyage of discovery. The sequel to the best-selling The History of Seafaring (ISBN 978-1844860401) Major launch and publicity campaign Lavishly illustrated history of European world map One thousand years of art, science, exploration, power and propaganda Based on the latest academic research Great illustrations of maps, paintings from the finest private and public collections as well as specially commissioned diagrams The Comprehensive history of European maps in one volume telling the exciting story of how cartographers first fully imaged the globe

Comments
Comments for "The Map Makers World: A Cultural History of the European World Map":